The winner of this Appalachian Division match-up will be in sole possession of first place in the division. Both teams are currently tied atop the division and this contest may have subtle impact on potential playoff seeding.

Asheville is coming off back to back shutouts, their latest victims the Greenville Greyhounds & the Carolina Silverhawks winning both contest by a total score of 70-0. Overall the Grizzles have outscored their opponents 206-11 with 3 shutouts and are averaging 41.2 points per contest. Asheville has a rich minor league history dating back as far as 1973. In the franchises history they have had two undefeated seasons and won league championships in 1999 and 2000. Since that time the Grizzles have made several deep playoff runs in the leagues they have played in and they look to continue that success in the GDFL and flex their muscles against a very good Carolina Bulldog squad.

Carolina has not shown any sympathy to their opponents this season either outscoring them 110-14 through 3 games. Quarterback Bronson Green has led the Bulldogs bite all season through the air and on the ground. Green has connected on 54-percent of his pass attempts with 6TD and 3INT. On the ground Green has found the end zone four times and is averaging 6.25 yards-per-carry on the season. Sanquan Davis is the leading rusher in what is a deep and balanced Bulldog backfield. Lamar Jones and Calvin Barringer each have put up effective numbers out of the backfield, a backfield that has four touchdowns amongst the group. Jon Hankin is the favorite target of Bronson Green leading the receivers from the tight end position with 8 catches 95 yards and 2TDs. Defensive linemen Mike Awute, Tremaine Caldwell, Frankie Little john and Taurus Covington along with linebacker Matt Tosi anchor the stingy Bulldog defense.


Something will have to give between these two teams looking to make a statement and no bigger statement can be made than leaving Joe Collins Stadium with the win in the division over a quality league opponent. Kickoff is set for 7pm. For more information and directions to Joe Collins Stadium visit www.thecarolinabulldogs.com

Tough Task Ahead For Lynx 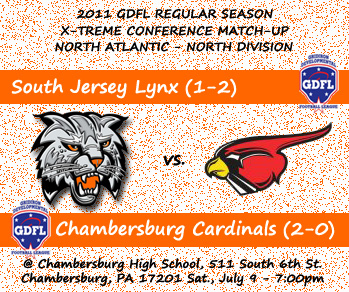 Lancaster,PA-The Lightning will host their second home game of the season on July 9th, facing the Jersey Stags. The game will also be the Lightning's Veterans Appreciation Night. All past and present military get free admission.

The Lightning traveled to Chambersburg last weekend and ran into a Cardinals team that was completely different from anything they have seen in the past. With a line up that Includes the brother of Baltimore Ravens star Ray Lewis, the Cardinals handed the Lightning one of their worst defeats ever. The week before the Cardinals defeated the Jersey Stags 41-0. The Stags were able to get back on track and get their winning percentage back to .500 with a victory this past weekend. Now the Lightning will look to do the same.

The Lightning will look to get back into the same mode they were in opening night when they defeated the South Jersey Lynx by a score of 35-34. After both the Lightnings and Stags fell victim to the Cardinals, they will now face each other in what should be a very exciting match up.


The Lightning play their home games at the brand new $10 million Manheim Township Athletic Complex. All home games also feature the Lightning's cheerleaders and their mascot, Boomer. Kickoff is at 7:00pm.
Other games in the North Atlantic – North Division this week are Washington (DC) Explosion (2-1) hosting Bergen Hawks (0-1).