Just saw this. It's pretty good sound advice and yes I know there are other ways but it's a start for those that don't know how to go about using twitter and other social media platforms for their future benefit instead of just using it for fun and nonsense.

SBNATION
What every football recruit should have in his Twitter profile

Don’t let these common mistakes cause a college coach to miss you.
By Bud Elliott
https://www.sbnation.com/college-football-recruiting/2018/1/31/16957252/football-recruit-twitter-guideline-checklist-social-media

This time of year, the next crop of college football recruits are anxious to receive scholarship offers. And one of the primary ways colleges contact recruits is through Twitter direct messages.

In order to do that, coaches, scouts, media, etc. will search for the recruit on Twitter in order to follow him. And this is where a lot of recruits mess up by making it difficult or impossible for recruiters to find them. Don’t let Twitter mistakes prevent your hard work in the classroom and on the field from getting noticed!

Real name: Either in the player’s @, or in the Twitter name, the recruit should have his real name as it would appear on his transcripts. If a nickname is common, put it in the bio. This is the most important thing. Without it, it is basically impossible to find the player on Twitter, and coaches are only going to take so much time searching.

High school name: If a coach has searched for your name, one way he can pick your profile out from other profiles who have the same name is by confirming that you attend the high school that he is looking for. Don’t abbreviate this.

Position: Let the coach know what position(s) you play.

Location: Again, a defensive back putting “______ Island” is cute, but it doesn’t help a coach or scout quickly find the player.

Profile picture: Have it be of your face. If the coach has seen you before, he can quickly ID you from your face.

Background picture: Have it be something football related, to again signal to coaches that you are a football recruit.

Highlight link: Don’t make coaches go hunting for this! Put your link in and then go to your profile and click on it to make sure it works. Too often, recruits screw up when putting the link in, and it doesn’t work.

Here is a perfect example: 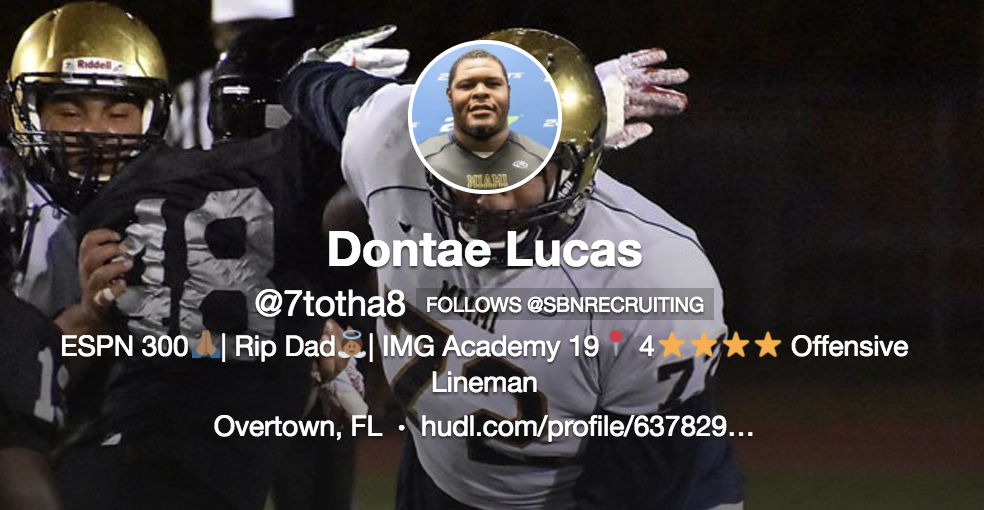 Here is what should not be in a twitter profile:

References to drugs: The other day, I was discussing a player with a coach, and he told me, “you do realize this kid’s Twitter name is a reference to drugs, right?” I didn’t, but the coach explained it. Don’t cost yourself a scholarship trying to be slick — college coaches are smarter than you think.

Inside jokes that are going to be offensive to outsiders: A college coach meeting a recruit for the first time is an outsider. Don’t give him a reason not to offer.

Do you believe he has the ability to play at my University?
So tell me how is he academically? His grades?
What about his conditioning? Does he bust his tail in the weight room?
Does he give you 110% at practice?
Exactly what type of a human being is he?